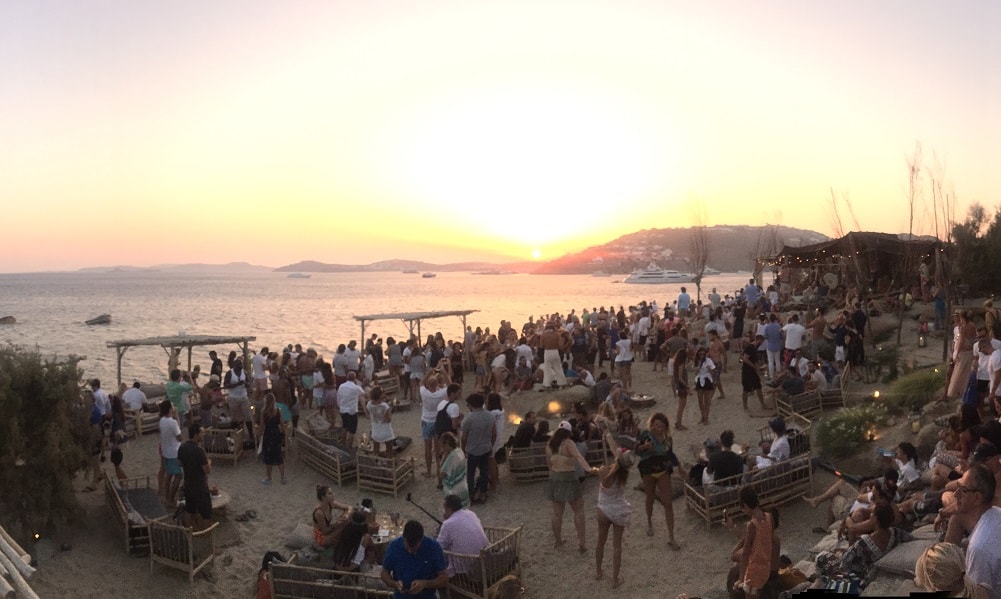 So I am flying back from Athens.  I always take an aisle seat.  Don’t ask me why.  This is for another time.  The middle seat is empty.  What a blessing, right?  I am looking forward to the “Boarding completed” by the hostess to leave my book on that middle seat and secure the left armrest all to myself.  When suddenly this tall Australian guy of 27 years old jumps into it at the very last minute.  Given his blue eyes, his dirty blond rather long hair, the angles on his face and that smile that Colgate would book it for commercials in a New York minute, given all this, I did not mind.  He can have the seat, the armrest and more if he wanted.  He didn’t.  He was coming to the Mykonos for a wedding.  With his girlfriend.  Not their wedding, but a friend’s wedding (a glimpse of hope right there).  Proving the Greek hospitable character of our country, I started chatting with him.  So what’s new in Mykonos, he asked.  Where’s the Mykonos party?  He had not been here for 3 years or so.  Afternoons, I replied.  Afternoons at the beach. Happening, wild, dancing and drinking afternoons at the beach!  “Where?”, he said, “Paradise and Super Paradise Beach?”.  Oh dear!  Turn on your smartphone with those immaculate well-manicured fingers and take notes….  Bonus this link with info what and where to eat when you party there.

THE 5 AFTERNOON HAPPENING SPOTS NOT TO BE MISSED

Nammos
Where: Psarou
Why: Because life is a party, it gets out of control, the champagne is for fighting, the music is uplifting, the rich are uber rich, the waiters only run never walk, it is an experience for at least once.  Nammos redefined the Mykonos party.
Who: Celebrities, filthy rich people, huge yacht owners, that pretentious b*tch from the office and you.  Oh and Lindsay Lohan.  Almost daily.  Or whenever she’s getting the dough to show up.

Skorpios
Where: Paraga
Why: Because it is super beautiful, it has 360 views, the atmosphere is mystical, it can be relaxing, unless there is a party, the sunset is unique, it is a cult experience and you are proud to belong to it.
Who: Reiki lovers, vegans, young executives trying to escape the stress, guys in white shirts and khakis and girls in silky earthy colored pareos.

Jackie O
Where: Super Paradise
Why: Because you want to party like it is 1999, because you do not want to wait till 2am to see the famous drag show.  The classic Mykonos party as you know it, at its best.
Who: Gays and their friends, designers, and straight men hitting on your female friends.

Principote
Where: Panormos
Why: Because it is beautifully designed, beige is your color, you’ve never been to Dubai, you like the Arabic culture, and you want to listen to the original songs before Angela Dimitriou and Kiamos got their hands on them.  You also want to get one of the exquisite necklaces the staff wears (if you ask, they will give you one).
Who: Middle east decent and their fans, royalty, and shisha lovers.