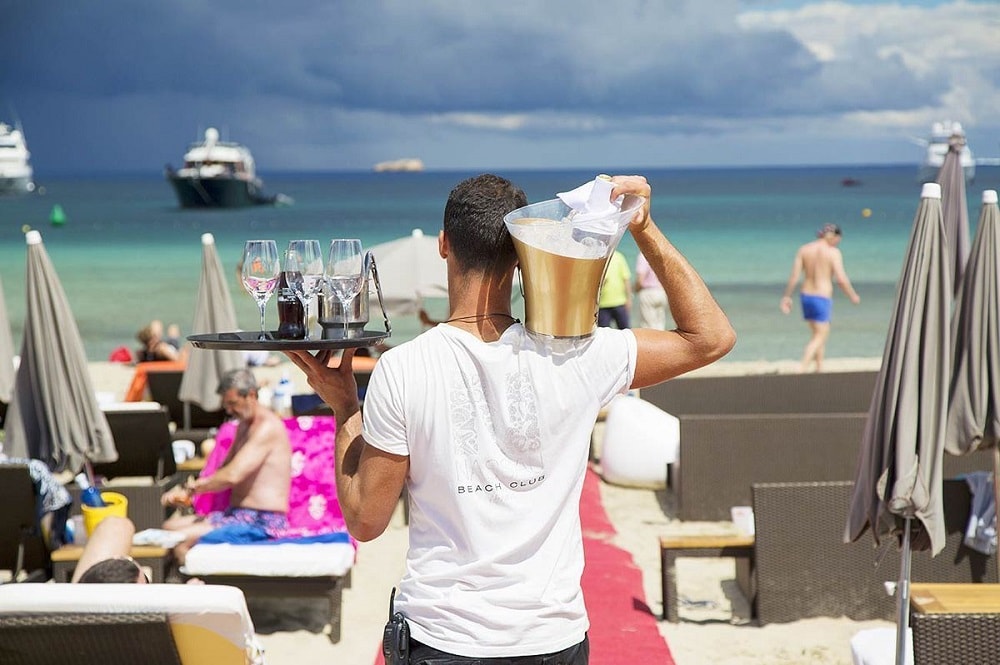 They are #young #beautiful #polite #helpful #fast #smiley and they need #nofilter ❣️ They are #nammos 😍 how do they keep these tshirts so #white #onthebeach? 😜 #bestever #dedicated #staff #mykonos #legends #makemyday #thankyou #partytime #mykonosfun2017

10 MYTHS ABOUT THE MYKONOS WORK FORCE

They have no vacation for 5 months. – TRUE
No day off. From late April to early October, it is nonstop. Not a single night/day off. Unless you are sick and you’d better not be.

They have the chance to party at the best party place on earth. – FALSE
They have the chance, but they don’t. Most of them get off at 1am or even later. If you want to be on top of game the next day, you cannot party, says Yannis from Scorpios. It is a lot of hours on your feet and you cannot afford to be dead or hangover. Of course once in a while they will scroll down to Chora for a drink or a late cup at Thalami. Remember they are young. Still it is the exception, not the rule.

Not only he is a #talented #singer but also the funkiest #dj in #mykonos 😎 @mihaliszeis you rock!!! ❣️ #popular #smart 💋#unique #vocals #atmospheric #cool #beats 👏 #instabeats #instamusic #mykonosfun2017 #mykonos2017 #kuzina

They take it easy during the winter. – TRUE
not all of them, but most of them. They definitely take some time off when they leave the island to rest after a super hectic summer. They do travel a lot during their months off. Usually abroad. To people they became friends with during the summer. “But to girls”, says Alexandra at Super Paradise, “it is tricky to go to guys, they might get the wrong idea and I just want to visit the place and see them as friends”.

Whatever you order, at @yummymykonos comes with a side of Mike’s smile ❣️ @miketheox sings along most #songs on the #radio 😆 we have #volos in common and our love for the #island and its #unsung #heroes, the #mykonos #work #force 😍 #young #polite #professional #happy #smiley #active #singing 😘#instapeople #instawork #instafun #mykonosfun2017 #mykonos2017

Lucky ones with free accommodation at the most expensive island on earth. – FALSE
If only. Some of them have to find accommodation on their own. This is a huge challenge. If it is tough for you to find a place that makes sense moneywise for 3 days, imagine for them for 5 months! Often the employers charge for the accommodation, in the range of 200euro per month. Others like Nammos, they have constructed dedicated facilities for the personnel. Everywhere they live from 2 to 5 in a room. They do not meet much, since they work different shifts. The facilities tend to be in the middle of nowhere. It is cute to sleep on the upper bunkbed, says Maria, like you are a kid again. Or the army, for some.

Sotiris aka @sot_oikon is a real #mykonos #vip himself. Very Important Person to know for having the #besttime @kuzina.mykonos

They make a lot of money in a short period of time. – TRUE
Not everybody, but the ones that work 15 hours or more. If you work hard, then you will earn accordingly. The Mykonos work wages are higher than the rest of Greece and the tips make the huge difference. But you have to manage to stay at the top of your game for 16 hours per day everyday from 5 months!

We met Andrew today at #agiosioannisbeach 😎 @andybak94 took care of us as if we were his best clients 😍And with that smile! 🙂#onthebeach #waterfront #underthesun #sunbathing #swimming #meeting #new #friends #blogging about #mykonos #work #force #unsung #heroes #instapeople #instafun #mykonosfun2017 #mykonos2017

They are Mykonos royalty, the doors are open for them. – FALSE
You’d think this is the case, but not. “Although we send people to clubs, bars, restaurants”, says Thanasis, “when we go, we might have to pay everything or even not let in, since it is too busy and they reserve the space for the foreigners”. Nevertheless when they go out, they hang out at bars where friends work, so often the drinks are offered. They do the same when they come to them.

Isn’t she amazing? Sing to me! #upsidedown she turns #mykonos @remezzomykonos ❣️

They are always professional and they seem happy. – TRUE
Trust me, they are. Nobody complains for the work load. They always have a huge smile and they do their best to meet our needs. They say the best for their employers, they stand behind their decision to work in such intense decisions. Nasos from Kuzina says it’s fair, what you give and what you get.

They get a lot of action, if you know what I mean. – FALSE
Actually they get a lot of flirting. Men, women, hit on them regardless of gender. The power of money make the clients thinks that they can buy you, says Nikos. “but it is not like that, we are not interested but in working during work hours and even later, things can get complicated. It is not a good practice to get involved with people who stay at the hotel or frequent the bar. We always alert the manager if things get out of hand, but mostly we manage to turn them down politely”.

A friend of many years, a super exciting Dj and a great smile ongoing ❣️ Vassilis at #thalami 😜 the #photo is dark because he is (σκοτεινός τυπος) 😎 #mykonos #bynight #greek #music #instafun #instabeats #mykonosfun2017 #mykonos2017

Mykonos is a resume/CV builder. – TRUE
Everybody worldwide knows the quality of service offered on the island and the hardship conditions of the Mykonos work force. Some people go as far as claiming that they would work for free at X beach bar, in order to get the credential on their work experience. OK I have not met any and I hope the employers here do not take advantage of this.

They have it easy because they work at expensive places. – FALSE
The opposite. Rich people can be rude, cold, demanding, arrogant, disrespectful. But we always remain polite, professional, humble, smiley. “Not everybody says, thank you or please, not everybody smiles”, says Dimitris, “check it out for yourself when they come and order drinks.”

I will keep talking to you and I hope you will keep talking to me.  I want to show all your faces and tell all your stories about Mykonos work.  Send me a message on Instagram or facebook.   Already you can see a lot more of these amazing people here at my post about the drinks and the people behind them.